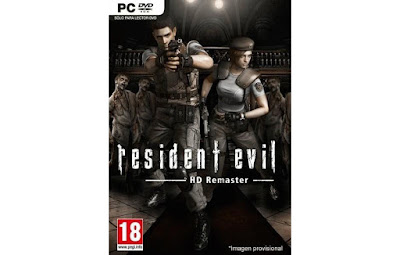 ABOUT THIS GAME
Welcome to Raccoon City, a beautiful city that is now like hell in the real world after a variety of murder cases with cannibalism traits that are clearly a new phenomenon in the corners of the city. The special forces team - Special Tactics and Rescue Service (S.T.A.R.S) was tasked with investigating the case. Divided into two teams - Alpha and Bravo, efforts to find reasons and solutions to this problem began. But unfortunately, Bravo team disappeared without a trace.

See Also
Alpha team finally managed to find the Bravo team helicopter that had fallen, but unfortunately, it was not seen at all that a survivor survived. In the middle of a dark forest, this alpha team is actually attacked by a herd of ferocious dogs that even managed to kill one of their team members. Pushed and no longer had any options at all, the rest of the alpha team S.T.A.R.S who had managed to run to the nearest Mansion, hoping for safer conditions. Unfortunately, one of them is also separated from there. Mansion which is supposed to be the solution to save themselves actually grows into a new nightmare. They are now like a prey confined together with their own hunters.

This mansion turned out to be filled with strange creatures, from those that are still human to an experimental monster all of which want to bite your neck off. The remaining members of the S.T.A.R.S team tried to investigate what really happened at this Mansion. Various documents and puzzles lead to one name, the root that gave birth to the Resident Evil franchise itself - Umbrella Cooperation.

So, what really happened in this giant villa? What about the fate of the existing S.T.A.R.S members? You can get all the answers to these questions by playing this Resident Evil HD Remaster.

As an HD Remaster project, visualization is of course the main focus Capcom wants to sell. As a gamer who can only taste the original version without ever playing the GameCube version in 2002 at all, Resident Evil HD Remaster looks amazing. Capcom looks very serious about working on this project by making sure it runs smoothly and without problems means in high definition. Supporting a variety of graphic and 16: 9 display options, you are like tasting a new generation game that is specifically developed for the Playstation 4, or Xbox One, or even a PC with qualified specifications. There is no doubt about that.

One of the most striking is of course the application of high-definition textures that spoil the eye here, especially for the main character you use. Face details, clothing textures, to just badge details S.T.A.R.S which are displayed on each character's left arm look charming. You are like being faced with the adventure of "new" Jill Valentine and Chris Redfield. But in addition to texture, the one that makes the impression even stronger is the lighting that is now more maximal. The bloom effect and powerful shadow placement, especially those that surround the character, are reinforced by the cinematic camera capture, making it feel amazing visually.

But modern taste is not the only thing that makes you - survival horror lovers will easily fall in love with this one series. Resident Evil HD Remaster will not only be of interest to those of you who may not be familiar with the classic series, but also for those of us who have known him since Capcom launched a dozen years ago. Capcom seems to understand the selling point. Details of texture and lighting might make this game feel like the latest generation project, but other elements that exist make it still flowing the sensation of nostalgia that is so strong. Capcom decided to maintain a pre-rendered environment in low texture with minimal added detail. But instead of damaging it, the combination of these two "times" actually makes Resident Evil HD Remaster look even more charming. Especially with the GameCube version of voice acts that are retained in it.

Apart from the significant visual enhancements that it offers, Resident Evil HD Remaster still retains its gameplay roots without any changes. He will throw you back into the terror of the past, while reminding why he was called as one of the hardest survival horror games at that time. The difficulty even starts before you start this game. When you are asked to choose one of the two karkater that can be used - Jill Valentine or Chris Redfield.

The choice of character is not just for cosmetic effects. Regardless of whether you choose to use Jill or Chris, you will be faced with storylines, companion characters, puzzles, and of course different strengths. From the side of Jill's story, for example, you will meet Wesker and Barry as the S.T.A.R.S team who managed to arrive together at the Mansion, with Chris as the missing party. But if you use Chris for example, then you, Jill, and Wesker are the survivors - while Barry disappears without a trace. This difference will make the presentation of the story to the final conclusion different for Jill and Chris. The good news? This means a high replayability level, where you can try to complete both stories without the need to feel too familiar with the challenges.

Not only from the side of the story, this choice will also determine what you can and cannot do, while directly influencing the existing style of play. One of the most essential? That Jill is equipped with 8 slot items, while Chris is only 6. This means, for certain conditions, where you will be forced to bring enough equipment to complete the puzzle for example, management will be more difficult in Chris. Even sometimes, forcing you to go back and forth to arrange the Item Box to fulfill that desire. Differences in basic items also affect existing access. Jill comes with a basic Lock Pick item, while Chris carries a Lighter. This makes Jill, have the opportunity to access the door or drawer that can be opened with Lock Pick faster, offering extra roads or just additional resources. But on the other hand, to eradicate zombies permanently, he was forced to sacrifice a special slot for the Lighter. While on the other hand, Chris faced a contradictory dilemma.

The best thing about this HD Remaster project is the fact that Capcom did not change the basic gameplay mechanics at all from the version of the GameCube Remake. Even though it offers an option for a more modern control system, you can still use the classic motion sensation that defines similar games in the past, where the "Top" button is associated as moving forward. The level of difficulty in "Normal" does not necessarily fall on modern standards which indeed must be admitted, now feels much easier. Just a little off guard, then you will face the Game Over screen repeatedly. Also remember, Resident Evil HD Remaster also does not offer a checkpoint system at all, which means making each death the same as trying to reach the same point of motion from your last save position. The key is to be careful.

There is a reason why Resident Evil appears as the most popular survival horror franchise of the past, and Resident Evil HD Remaster makes you explore all these charms. You will be faced with a typical classic survival horror game that does not make you a "superhero" without a match, but as a victim who is so vulnerable. Limited bullets, hard-to-find healing items, enemies that can kill you in a fast time, a myriad of puzzles that need time to solve, maps - keys - and corridors that you have to stop repeatedly, to management resources to arrange items to be taken be the main challenge. Departing from all systems like this, it is a very rational choice to run more than kill any zombies. Why? Because despite all the limitations that you already have, these zombies are also not creatures that are easily killed. It takes at least more than 8 handgun bullets to make them fall permanently, beyond your luck to break their heads with heavier weapons. With the number of bullets so limited, saving them for more dangerous conditions will help you complete this game better. If there is an open space to run, then run! Escape from a battle that does not need to be something essential, and must be done with pride. Especially if you have to deal with monsters that are more severe than just walking creatures.

One that might be quite surprising for young gamers when tasting Resident Evil HD Remaster is the puzzle they offer. Puzzles like this are indeed still things that modern games often offer today, but with a much simpler approach. Most of them only require you to think systematically, and voila! the obstacle is solved. But not with Resident Evil HD Remaster. It carries the classic taste that makes these puzzles more complex to solve because of the influence of factors other than mysteries that you have to solve yourself. You are forced to be observant about each item you get and see if there are hidden keys in it. You will be forced to move back and forth through the same place to find out where it really should be used. You are encouraged to memorize the Mansion and position each door to minimize unnecessary motion. You need more than just logical thinking here. You need better observation and memory skills.

There are so many things to think about. One thing is certain, this is not a third person shooter style like Resident Evil 6 that allows you to spit out as many bullets as possible and look like Rambo who is tasked with eradicating threats with story lines that begin to be unclear. Resident Evil HD Remaster offers the sensation of Resident Evil that should be.

Incredible, there is no more precise word to explain this Resident Evil HD Remaster. Although there was a bit of pessimism when Capcom announced this project a few months ago, all doubts seemed to disappear when the game started running on our PC. As an HD Remaster project, it looks very seriously developed with very significant visual enhancements. Details of texture, rebuilt lighting, with amazing shadow effects make Resident Evil HD Remaster feel worthy of being aligned with the latest generation of gaming products at this time. The best part? Despite Capcom's efforts to offer a more modern identity, they retain all the elements that made this series so loved in the past. Difficulty level, control mechanism, pre-rendered settings that actually appear charming in lower resolutions, to existing voice acts. He even offered a surprise extra for you who had enjoyed the original Resident Evil from Playstation but had never tasted the previous version of GameCube. 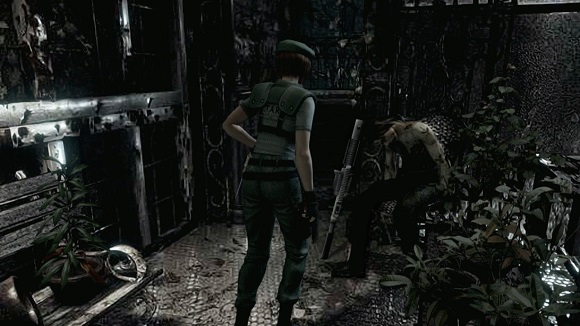 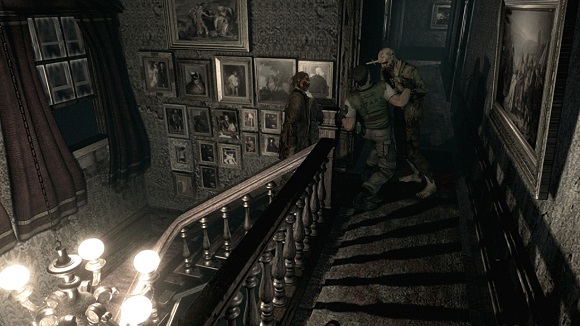 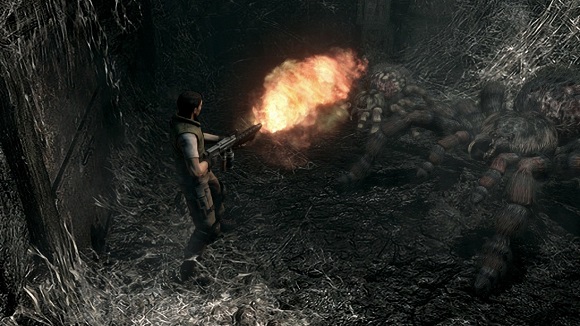 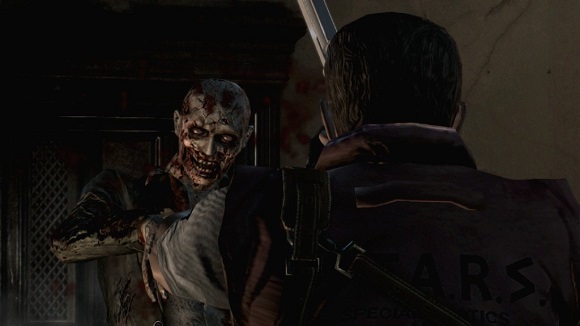